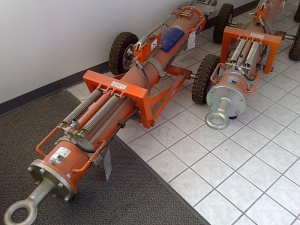 Towbars are used to connect the tug to the nose landing gear of the aircraft. The towbar must be long enough to place the tug far enough away to avoid hitting the aircraft and to provide sufficient leverage to facilitate turns. Heavier towbars, for large aircraft, are equipped with wheels. When not connected to an aircraft. The wheels are attached to a hydraulic jacking mechanism which can lift the towbar to the correct height to mate to both the airplane and the tug, and once this is accomplished the same mechanism is used in reverse to raise the towbar wheels from the ground during the pushback process. The towbar can be connected at the front or the rear of the tractor, depending on whether the aircraft will be pushed or pulled. The towbar has a shear pin which prevents the aircraft from being mishandled by the tug; when overstressed the shear pin will snap, disconnecting the bar from the nose gear to prevent damage to the aircraft and tug.

Skybus LLC/ Global GSE stocks a variety of aircraft towbars. If you do not see what you need here, please contact us as we have new stock arriving weekly.